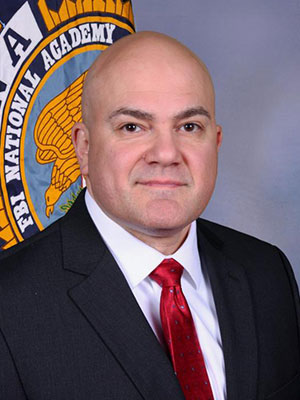 An attorney and captain in the fourth largest police department in the United States, D. F. Pace focuses on balancing constitutional law and civil rights with public safety. He currently serves as the Commanding Officer of the Department’s Police Board of Inquiry.

Captain Pace is an 18-year veteran of the Philadelphia Police Department, having served in patrol as an officer, sergeant and shift commander.  In addition to his patrol experience, Pace has also held positions in the Law Department, as Judge Advocate, Police Academy Instructor, Public Information Officer and Commanding Officer of the Court Evidence Unit.

Prior to embarking on a career in law enforcement, D.F. spent eight years as a corporate trainer for one of the nation’s largest financial institutions, PNC. Travelling across the country, his primary mission was to train the organization’s front line supervisors in leadership skills, human resource management, and delivering world-class service to clients.

D.F.  is no stranger to the lectern.  An active and veteran adjunct professor, he has taught dozens of graduate and undergraduate courses at several universities.  In addition to logging thousands of hours in front of college students and police personnel, Pace is a three time champion of the Pennsylvania Bankers Association Annual Public Speaking Contest.  He has traveled extensively, speaking before many community and professional groups on topics including policing, leadership, customer service, conflict resolution, environmental challenges, the law, ethics, white collar crime, human trafficking, and business principles.

Pace holds a Juris Doctorate from the James E. Beasley School of Law at Temple University and a Bachelor’s Degree in Human Resource Management from Rosemont College. He is a member of the Bar in Pennsylvania and New Jersey. He is a graduate of the 256th session of the FBI National Academy and was the class’s commencement speaker.  D.F. also serves on the Human Resource Committee of the Major Cities Chiefs Police Association.

Among his most memorable and meaningful experiences, Pace spent three months at Chulalongkorn University in Thailand where he earned a professional certificate in Peace and Conflict Studies.  From there, he traveled extensively studying firsthand the impact of corporate globalization, labor exploitation, and the international & transnational crimes of terrorism, drug distribution, and human trafficking.

D.F.’s interests include physical fitness, animal welfare, and sustainability issues.  He is an avid supporter of Rotary International and a member of several other fraternal organizations.  He is a voracious reader of history and enjoys collecting and appraising art and historical memorabilia.  A fully licensed auctioneer, you’ll find him in an auction house from time to time calling bids and selling anything from estates to fine art.

D. F. Pace’s presentation will focus on personal observations and experiences in the Rotary Peace Scholar program; how he came to be awarded the Rotary Peace Fellowship; and how the training has influenced and been applied throughout his career in law enforcement.